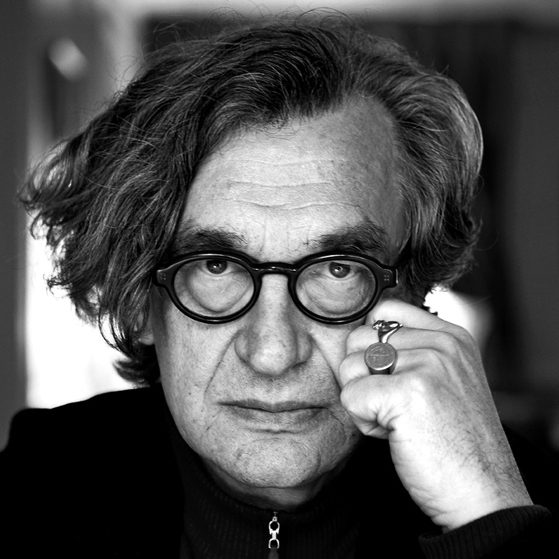 Director, screenwriter, producer and photographer, Wim Wenders, born on 14 August 1945 in Dusseldorf, is one of the most famous authors of German cinema. He made his first feature films starting from the 1970s: Alice nella città (1973), Falso Movimento (1974) and Nel corso del tempo (1975), international critics’ prize at Cannes, considered by many to be one of his masterpieces. a leading exponent of the New German Cinema. The following films were acclaimed by critics and achieved great success with the public: The state of things (1982), a splendid reflection on the cinema that obtained the Golden Lion at the Venice Film Festival, the road-movie, Paris, Texas (1984) ), Palme d’Or at the Cannes Film Festival and Il cielo sopra Berlino (1987), a tender and melancholy tale of our times, award for best director at the Cannes Film Festival. In recent decades, he has alternated the making of fictional films and documentaries. The reception in cinemas is significant: more than the feature films, such as the controversial Until the end of the world (1991), So far so close! (1993), Grand Jury Prize at Cannes, and Back to Life (2015), audiences have awarded documentaries such as Buena Vista Social Club (1998), an exciting diary of her encounter with musician Ry Cooder and the great music artists Cuban, Pina (2011) on the dancer Pina Bausch and the recent Il sale della terra (2014) with the photographer Juliano Ribeiro Salgado. Interested in music and new artistic languages, he plans to create an artist’s book linked to a multimedia installation in Rome. 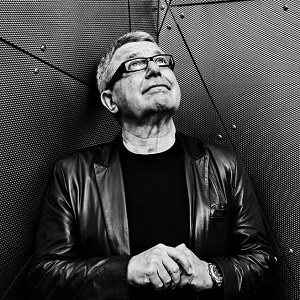 Daniel Libeskind, born in Lodz in 1946, is an international figure in architectural practice and urban design. He is well known for introducing a new critical discourse into architecture and for his multidisciplinary approach. His practice extends from building major cultural and commercial institutions – including museums and concert halls – to convention centers, universities, housing, hotels, shopping centers and residential work. Critics often describe Libeskind’s work as deconstructivist. Amongst his projects: the Jewish Museum in Berlin, the Imperial War Museum North in Manchester, the Creative Media Centre in Hong Kong, the Fiera in Milan, the Reflections at Keppel Bay in Singapore. Poliedric artist and theorist, he also designs opera sets and maintains an object design studio in New York. For Volumina, he chose to create a design tridimensional artbook on contemporary architecture and a multimedia installation to be completed by 2012. 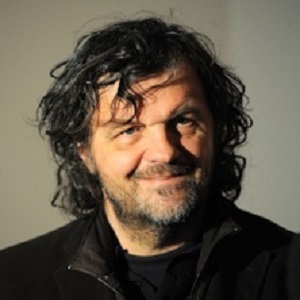 Born in Sarajevo, Bosnia-Herzegovina, November 24, 1954, Emir Kusturica directs his first feature film, Do you remember Dolly Bell? in 1981 and immediately won the Golden Lion at the Venice Film Festival. The second film, Papa is on a business trip (1985), won the Palme d’Or at the Cannes Film Festival, and the third, Il tempo dei gitani (1989), the award for director, also in Cannes. Acclaimed by the European critics, also with his first American film, Arizona Dream (1993), with Johnny Depp, he obtains a Silver Bear and the Special Jury Prize at the Berlin Film Festival. In 1995 he made his most controversial film, Underground, which was presented at Cannes, where he won the Palme d’Or and three years later he created Gatto nero, gatto bianco, and Leone d’argento in Venice. Politically engaged in the broad European debate on, Kusturica alternates the promotion of his films, from La vita è un miracolo (2004) to On the Milky Road On the Milky Way (2016), shot in the traditional village of Küstendorf he built, with acting (he is an actor in numerous films), music (he toured the world with the No Smoking Orchestra band), installations and theatrical performances, the most important of which is La Magna Grecia in Senise, with the artistic advice of Volumina. 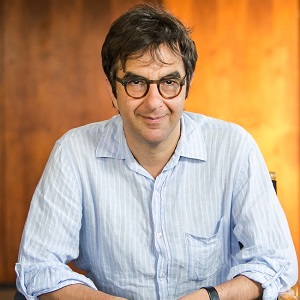 Born in Cairo in 1960, Atom Egoyan, a Canadian director of Armenian origin, is a filmmaker who is also interested in experimenting with other artistic forms. He attracted the attention of sector critics and the public right from his earliest films; Family Viewing (1987), Speaking Parts (1989) and The Adjuster (1991) already encapsulated the central themes of his opus: the question of identity and family roots and the theme of using technology as an ambiguous instrument to record and keep the memory. In 1994 he won the Critics Prize at the Festival of Cannes for his film Exotica, while his next film, The Sweet Hereafter, won the Special Jury Prize at the 1997 Festival of Cannes, as well as two Academy Awards nominations for best director and best adapted screenplay. In 2002, he showed the mark the Armenian genocide has left on various generations in exile in Ararat. In recent years, he has made successful films like Where the Truth Lies (2005), the erotic thriller Chloe (2009), Devil’s Knot (2013) and Remember (2015). At the same time, has created multimedia installations for the Venice Biennale, the Musée D’Art Contemporain de Montréal and TIFF, directed operas, collaborated with Philip Glass, Steve Reich and Daniel Lanois and created the artbook Dear Sandra for Volumina, a tribute to one of his maestros, Luchino Visconti. 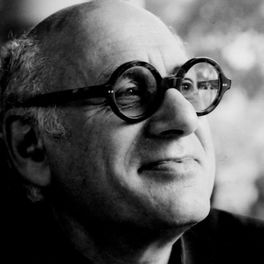 An undisputed maestro of minimalism, Michael Nyman is one of this century’s greatest composers. Born in London in 1944, after debuting as a critic and publishing the book Experimental Music: Cage and Beyond, he began to write music during the 1970s. His first works were irreverent versions of the classical repertoire, like the entertaining In Re Don Giovanni. His inimitable style is based on recognizable melodies, persistent rhythms, controlled repetition and highly precise and energetic execution. He composes music for operas, ballets, orchestras, string quartets, solo piano and for his ensemble, the Michael Nyman Band. He became famous through his film soundtracks and his collaboration with Peter Greenaway on at least 20 films, from The Draughtsman’s Contract (1982) to Prospero’s Books (1991), with Jane Campion on the award-winning The Piano (1993). He has always been fascinated by the world of images and thus decided to go behind the camera, taking photographs and making videos wherever he has held a concert. This passion took form in the book and exhibition Sublime. 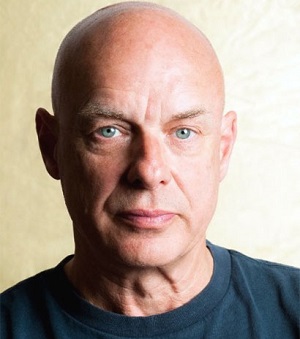 Born in May 1948 in Woodbridge, Suffolk, Brian Eno is the undisputed Maestro of electronic music. A musical theoretician and the inventor of ambient music, over the course of the past thirty years he has transformed the language of sound. A founding member of Roxy Music, he has also headed record labels (Opal and Obscure, with whom Michael Nyman debuted) and written musical scores for movies such as Until the End of the World by Wim Wenders and Blue (1993) by Derek Jarman. He has produced records for Talking Heads, David Bowie, Peter Gabriel, U2, and Coldplay, and has himself cut many albums of songs and ambient music (such as Discreet Music and Music for Airports). Eno has always been fascinated by the potential of new technologies, and apart from writing the start-up jingle for Windows, he composed the music for the videogame Spore by Will Wright, and has also created iPhone applications. Over the past decade, he has made sound, light, and video installations, such as 77 Million Paintings, which uses a generative system he created to produce constantly changing visual and audio flows. 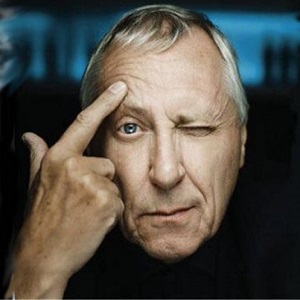 Painter, author, director of films and operas, creator of multimedia shows and recently even VJ, Peter Greenaway is the perfect embodiment of the modern artist. With his creative and visionary spirit, he is deeply tied to the tradition of figurative art and fascinated by the potential of new technology. He made his name in cinema directing successful films like The Draughtsman’s Contract (1982), The Cook, The Thief, His Wife and Her Lover (1989) and The Pillow Book (1996). His paintings and drawings are on view in many prestigious galleries and his multimedia shows are featured in museums throughout the world, like his installation Nightwatching at the Rijksmuseum. He is very fond of Italian culture and has had a special relationship with Turin ever since his first visit here in 1995 to present the first Italian study ever made of his cinema. He dedicated the artbook Tulse Luper in Turin to the city, has made 92 drawings of the Mole Antonelliana, filmed an episode of The Tulse Luper Suitcases at the castle of Racconigi and worked on the ambitious project Peopling the Palaces for three years. Greenaway, born in Newport in 1942, is the honorary president of Volumina. 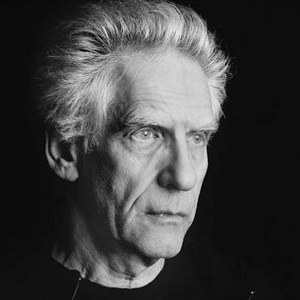 Born in Toronto in 1943, David Cronenberg is an undisputed master of contemporary cinema. During the 1970s, his fascination with transferring philosophical, scientific and technological themes to his films earned him a reputation as one of the masters of horror films thanks to movies like The Brood (1979) and Scanners (1981). His films, from Videodrome (1982) to Dead Ringers (1988), explore man’s terror of the genetic mutation of bodies, of the psychological and physical infection of the flesh and the destructive impulses of the mind. More recently, after the success of his film Crash at the 1996 Festival of Cannes, and Spider (2002), he tried his hand at big budget productions with the Majors and directed A History of Violence (2005), Eastern Promises (2007), Cosmopolis (2012) and Maps to the Stars (2014). At the same time, he developed a series of projects outside the realm of cinema, like the opera The Fly (based on the homonymous film he directed in 1986), which was performed in Paris and Los Angeles in 2008, the artbook Red Cars presented at the Venice Biennale in 2005, the exhibition Chromosomes and the installation Red Cars at the Palazzo delle Esposizioni of Roma in 2008. In 2014 published his first novel Consumed: A Novel and in 2013 the Toronto International Film Festival organized the main exhibition Evolution, of which Volumina has published the catalogue. 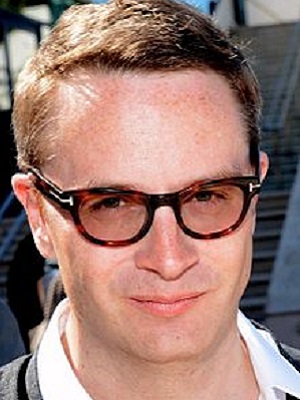 Director, screenwriter and producer, Nicolas Winding Refn was born in Copenhagen and grew up in New York. at the age of 24 he wrote and directed Pusher (1996), an extremely harsh and violent film, which soon became a cult phenomenon, which brought him to the attention of critics at the international level. Later films include Bleeder (1999), Fear X (2003), Pusher II – Blood on My Hands (2004) and Pusher III – The Angel of Death (2005), which complete the trilogy, Bronson (2008) and Valhalla Rising – Regno di sangue (2009) presented at the Venice Film Festival that helped define the film style of NWR in the media world as “Refnesco.” Loved by the public as a rockstar, in 2011, was awarded for Best Director at the Festival de Cannes for his masterpiece Drive starring Ryan Gosling with the soundtrack signed by Cliff Martinez. Two years later, he returned to competition in Cannes with the controversial Solo Dio Perdona, who divided public opinion around the world, as well as the film set in the world of The Neon Demon models in 2016. His wife, actress and director Liv Corfixen, in 2014 dedicated him the documentary My Life Directed by Nicolas Nicolas Refn that reveals the difficulties of her husband in the realization of Solo Dio Perdona and shows the complexity of combining the public craft of director with that private husband and father. For Volumina he is preparing a lighting multimedia installation dedicated to his musical passion accompanied by a refined catalogue.

This website uses cookies to improve your experience while you navigate through the website. Out of these, the cookies that are categorized as necessary are stored on your browser as they are essential for the working of basic functionalities of the website. We also use third-party cookies that help us analyze and understand how you use this website. These cookies will be stored in your browser only with your consent. You also have the option to opt-out of these cookies. But opting out of some of these cookies may affect your browsing experience.
SAVE & ACCEPT